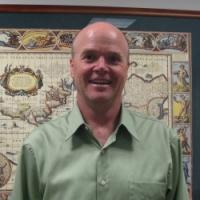 Swimming in 34-degree water might sound crazy to some, but it's exactly the type of training White needs to keep his skills sharp.

It's the closest he's going to get to simulating conditions in Alaska, where White travels most years to conduct research off the coast.

His work there focuses on a particularly warm period in Earth's history, the Paleocene-Eocene Thermal Maximum, and what it can tell us about our future.

Approximately 55 million years ago, during the PETM, the Earth was nearly free of icy glaciers and alligators could be found crawling in northern Greenland, White said.

"By a fairly large group of scientists, it's thought to be the closest analogy to where the Earth is headed in the next 500 years or so," he said. "It was a very warm time, when all the information that we're capable of gathering suggests there was very little if any polar ice ... ."

But bits of sediment found in the fossil record lead White think there may have been ice on the ocean after all, at least seasonally.

If so, it could mean at least some ice formed on the ocean during a time when many believe there was little, if any, on the planet.

"We really want to nail this stuff and be able to inform decision-makers in an accurate way," he said. "We need to be really confident in our reconstructions."