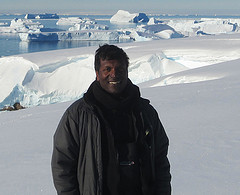 Sridhar Anandakrishnan is away for the winter holiday, somewhere summer is in full swing -- an ice sheet at the end of the earth.

The Penn State professor of geosciences is leading the University team that's part of a project on the Pine Island Glacier, an extension of the Antarctic ice sheet. The goal of the National Science Foundation-funded initiative is to get a better understanding of how the glacier, the ocean and the ice shelf are interacting, and what that could mean if water temperatures rise.

The project includes teams from NASA, the University of Alaska, New York University, the Naval Postgraduate School and the British Antarctic Survey. It's the first of its kind to focus on the Pine Island Glacier, a remote region that can only be reached a few months a year in an airplane that lands on skis.

"It's a pretty spectacular spot," Anandakrishnan, a faculty member in Penn State's Earth and Environmental Systems Institute, said before leaving campus to join doctoral student Kiya Riverman and research associate Leo Peters, who are part of his team.

Riverman and Peters arrived at the site – literally a camp on the ice – after Thanksgiving. If the weather cooperates, Anandakrishnan is traveling first to McMurdo Base on Ross Island and from there will communicate with the team at Pine Island Glacier.

An ice shelf is an extension of the Antarctic ice sheet, but, unlike the ice sheet, ocean water flows in the cavity underneath the shelf. Anandakrishnan compared the cycle of melting and freezing that goes on to a bank account: Snowfall gradually adds to the glacier, which in turn flows out to the ocean, leading to "withdrawals" from the account. When it snows, more ice goes back into the bank account.

"If the cycle is nicely balanced, everybody is happy," he said.

But if more ice flows out into the ocean than snow goes back into the glacier, that means a rise in the sea level. If temperatures climb, one possibility is that the melting ice shelves – floating extensions of the ice sheet – will shrink and provide less of a buffer between the ocean and the Antarctic ice sheet. That, in turn, could allow more ice to flow out, leading to rising sea levels.

To gain a better understanding of the possible outcomes, the team will create a computer model for that cycle and what changes in the various factors would mean. The project includes drilling two holes through the shelf, which is about 500 meters thick, and putting in oceanographic instruments to measure the temperature, salinity and circulation of the water below.

The Penn State team's part of the project is to developing the seismic image that will provide a map of the shelf – how thick the ice is and how deep the water in the cavity underneath it is. From there, the team will build a computer model that can show how the water circulates under the shelf.

"It will give us a better feel for how much flow there is under the ice shelf," Anandakrishnan said.

That will be a change from how little is known now about how the water behaves in that part of the world. "There's very little data right now," he said. "It's terra incognita."

Travel to the glacier, where temperatures can be subzero even in the summertime, is limited to a few months a year. McMurdo Base has dormitories and other buildings, but accommodations on the icy terrain where the work is taking place are more primitive – tents and sleeping bags. That includes a tent for cooking where even though temperatures might reach 80 degrees above the stove, they drop to 20 below on the icy floor.

The challenges of doing research there notwithstanding, Anandakrishnan swears by the area's beauty.

"If there are no clouds, it's absolutely gorgeous," he said. "The sun provides so much heat that, if it's not windy, it's literally T-shirt weather."