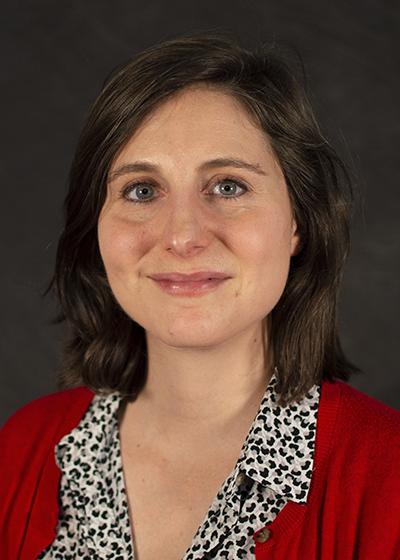 From solving a food crisis to changing how scientists understand the fossil record of early life on Earth, Julie Cosmidis sees big solutions under the microscope.

Assistant professor of geosciences and principal investigator of The Biomineral Factory at Penn State, Cosmidis studies the processes by which bacteria form minerals, called biomineralization, and how scientists use these processes to identify the presence of life in the rock record. She also studies organomineralization, the role of organic materials in mineral formation.

"These processes are important as they control the mobility and bio-availability of different elements in geochemical cycles," said Cosmidis. Her lab work focuses on the minerals phosphate, elemental sulphur and calcium carbonate.

Phosphate is an important ingredient in fertilizer and can increase crop yields by 50 percent. Scientists expect that mining activity will deplete all natural phosphate reserves in the coming decades. Cosmidis thinks the bacteria responsible for kidney stones may hold the answer to this problem.

Some types of kidney stones form when E. coli in the body turns urine into phosphate minerals.

"All the phosphates that a human expels through urination equals the amount of the minerals we are mining from rocks that will soon be depleted," Cosmidis said.

She recreates the process in her lab using synthetic urine. Cosmidis wants to find a sustainable method for collecting phosphates from urine and then optimize the process so scientists can use waste to create fertilizer.

Cosmidis also studies elemental sulfur and its role as a biosignature. A biosignature is a physical clue that suggests the presence of life. Elemental sulfur forms when bacteria interact with sulfides. Under a microscope the bacteria have a slender, threadlike shape. Scientists looking at fossilized records view this as proof of life in the past. This may not be the case, according to Cosmidis.

While conducting a lab experiment, she and her graduate researchers added organic material to sulfide. Organic material can be complex, like yeast extract, or simple, like glucose. Cosmidis and her research team were amazed to see the organics self-assemble into microscopic filaments that contain and stabilize elemental sulfur.

"We discovered this almost by mistake," Cosmidis said.

The findings suggest that the formation of elemental sulfur can be chemical and not bacterial, leading to what scientists call a false biosignature. This has implications for the fossil record.

"The point of the research is just because you see an organic filament in rock does not mean that you found bacteria."

In addition, Cosmidis studies the role of bacteria in whiting events at Fayetteville Green Lake in New York state. Whitings occur when calcium carbonate becomes suspended in a body of water, causing the water to appear white. Earlier research identified cyanobacteria as the cause, but Cosmidis’ lab found it due to a different microorganism, diatoms, which may indicate a nutrient change in the lake.

"How whiting happens is a mystery," Cosmidis said. "There exist many theories. We are looking to form a good consensus."

Cosmidis completed her undergraduate studies at the Ecole Normale Supérieure de Lyon, France, and earned her Ph.D. in geochemistry from the Institut de Minéralogie, de Physique des Matériaux et de Cosmochimie and Institut de Physique du Globe de Paris, France. Before joining Penn State in 2017 and EESI the following year, she was a research associate at the University of Colorado, Boulder.

In her spare time, the mother of two likes to play the piano, hike, and make pottery.