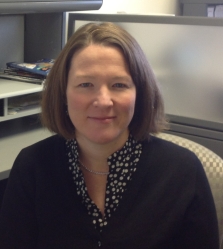 Science, a topic difficult to understand for many. One of EESI's goals in the 2008-2014 strategic plan was hiring an interdisciplinary program coordinator/ professional writer to help EESI spread information about the work of EMS faculty and students in the environmental sciences.

That's where Anne Danahy comes in. She is a writer who joined EESI in fall 2012. She has a talent for creating fascinating understandable stories even if the topic is complex. Her repertoire is far-reaching. She writes about droughts and fires in the Amazon, about habitable planets, paleoceanography, birds and their environment, fracking and gas well flowback, politics, poverty, climate change and many more topics. She not only interviews scientists but also university presidents and trustees, school teachers and students and regular citizens.

"One of the favorite parts of my job is talking with scientists and their students and learning about the research they're doing," Anne said. "Last week, I got to have a FaceTime chat with one researcher while he was on a summer program in Alaska, and go watch another researcher and his students do field work on vernal pools."

In 2013 Anne was the recipient of the College of Earth and Mineral Sciences' Future Star Award. In addition to her job as science writer she teaches news writing and is a volunteer host of a Q&A program on the local cable television access station, C-NET.

Prior to joining ESSI, Anne worked for about 12 years as a reporter at the Centre Daily Times.