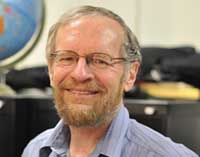 Please join us in congratulating Professor Richard Alley on being awarded the prestigious BBVA Foundation Frontiers of Knowledge Award in Climate change. In its citation, the jury praised Alley for his "pioneering research" into the "mechanics of ice and its implications for abrupt climate change."

Jury member Miquel Canals refereed to Alley as "our best interpreter of ice. Although there are others working in different aspects of the field, he is the one who completed the circle: in ice he has read the history of the atmosphere, with its phases of abrupt change. He has elucidated its mechanisms of formation and deformation and how it interacts with climate. Alley explains the present while keeping a window open to the past and analyzing possible future paths."

"Climate change doesn't just mean the globe is warming, it also means ice is melting," said Dr. Susan L. Brantley, who nominated Alley for the award. "Richard Alley is the premier ice specialist in the world and has done more than anyone to educate us about changing and moving polar ice. Richard and I have worked together for many years in Penn State's Earth and Environmental Systems Institute and I am exceedingly proud of his accomplishments. This award is richly deserved."