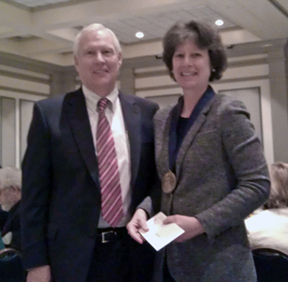 Three faculty members and a staff member in the College of Earth and Mineral Sciences were among those singled out this year for recognition by the University for excellence in education and research.

President Rodney Erickson presented the 2013 awards at a recent recognition event. The honors are given to faculty and staff each year in honor of outstanding contributions. The four EMS employees were among those singled out for their excellence in teaching, research and service.

"Penn State's strengths in the engineering and physical sciences are its imprimatur. Sue, Peter, Rob and Martha are the latest members of the College of Earth and Mineral Sciences to prove that they are a cut above," said William Easterling, dean of the College.

Brantley received the 2013 award for physical sciences in recognition of her pioneering work in applying chemical and physical principles to geological processes at the earth's surface, including weathering and erosion.

Brantley said she was honored and surprised to get the Faculty Scholar medal at a college and university with so many talented scientists.

"The best part of getting the medal was listening to the stories of all the other awardees, and being part of the terrific creativity we have here at Penn State," she said.

Brantley has been a faculty member at Penn State since 1986. Her recent work includes research focused on the "critical zone," the planet's surface that sustains human life. One nominator said that the quantitative reactive transport models she developed represent a breakthrough for modeling weathering in the critical zone on the geological time scale and that the results have "broad implications" for understanding the role that weathering plays in soil formation, the fate of contaminants and the sequestration of anthropogenic carbon dioxide.

Brantley is also a founder of the Shale Network, a collaborative effort by researchers from Penn State and other institutions to collect data on water quality in the shale gas drilling regions.

In addition to her research and teaching, Brantley is director of the Earth and Environmental Systems Institute, which encourages innovative, interdisciplinary research by faculty and students on compelling scientific and social issues.

Physical sciences is one of five areas the University awards the Faculty Scholar Medals. The others are life and health sciences, engineering, social and behavioral sciences, and arts and humanities. The awards recognize scholarly excellence shown by a single contribution or series of contributions tied to one theme. A committee of peers picks the candidates from a pool of nominees to recognize work done in the past three years.

Wilf was chosen as one of six faculty members to receive the Atherton Award for Excellence in Teaching, for teaching undergraduates.

"I draw heavily on my field experience all over the world, and I try my very best to bring the raw excitement of primary scientific discovery directly to my students at every level, in every single class and field trip," he said.

For the Geobiology class he teaches, he added a capstone field trip to the Denver area, where students "see and touch the layer of airborne death rock that marks the end of the Age of Dinosaurs."

An associate professor of geosciences, Wilf is also a faculty member in Penn State's Earth and Environmental Systems Institute. His initiatives include starting Geoscience Scholarship to help students learn what it's like to work in a research environment, including writing an article in the style of a peer-reviewed paper. The general education class he teaches, Dinosaur Extinctions and Other Controversies, reaches more than 200 students every fall. Coming from a range of majors, the undergraduates learn about geology, paleontology and evolution.

Wilf said he learned from good teachers, including many in his family. His father, a mathematician, believed that good research "fuels the best teaching at the university level."

"Good teaching is simply trying everything you can possibly think of to excite students about learning and tirelessly building upon what works best," Wilf said. "It's never enough just to prepare the content for delivery. A class is not ready to go if you have not left time to ask yourself, 'how can I make this more exciting, fun and challenging?'"

Crane received the Kopp Award, which is named for the late deputy vice president for international programs and recognizes faculty and staff for significant contributions to advancing the university's international mission.

Crane's work in international education includes developing the Center for Advanced Undergraduate Study and Experience, a two-semester, problem-based, collaborative learning course that has had students conduct research in Egypt, Japan, South Africa and New Zealand. He is director of the College of Earth and Mineral Science's Alliance for Education, Science, Engineering and Development in Africa.

Crane has been a member of the Penn State faculty since 1985. In that time, he has served as interim director, global engagement, for the University Office of Global Programs, a member of the Global Policies Task Force, interim director of global relations and programs at the University Office of Global Programs, and chairman of the University Strategic Planning Council Task Force on Internationalization, and chairman of the International Council Executive Committee.

One nominator said Crane "builds collaborations between people from Penn State and people from other countries wherein there is a genuine two-way sharing of experience and expertise."

Traverse, who has worked at the university since 1989, is an administrative assistant in the office of the associate dean for education and Ryan Family Student Center, where she is known as a "go-to person" for a range of issues. Among Traverse's accomplishments is serving as nomenclator at commencement proceedings and making sure that the name of every graduating student is pronounced correctly.

She has also been the force behind several outreach initiatives in the college, including creating and editing a biannual newsletter focused on student, faculty and staff achievements and other initiatives. She pioneered the idea of using the ground floor of Deike Building to showcase the undergraduate experience in EMS, replacing dust-covered exhibits with a pictorial showing students' research travels, "Across the State; Across the Country; Across the World."

She has worked with hundreds of students who want to present petitions to the Faculty Senate and has served as the staff liaison for the Academic Integrity Committee.

One nominator pointed to her extensive participation, saying, "Ms. Traverse's commitment to providing superior service to our students is underscored by her volunteerism on commissions and committees around the University." "Her positive influence on students, staff and faculty alike has made – and continues to make – a significant difference at Penn State," a nominator wrote. "Indeed it would be hard to conceive of the EMS without her."