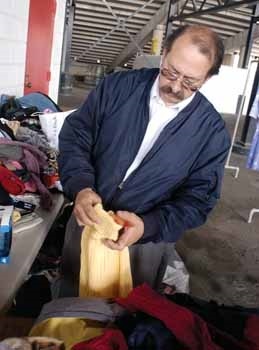 Penn State is giving new life to thousands of tons of garbage that would typically get shipped to a landfill -- turning it into a gardener's dream ingredient -- compost.

The program, formerly known as "No Can Do" and now named "Mobius" is being expanded to include composting bins in buildings all across campus. The university is asking faculty, staff and students to toss that banana peel, paper napkin and unfinished sandwich into building composting bins, not the garbage cans.

"It's about doing the right thing with our waste and managing it," said Al Matyasovsky, supervisor of central support services in the Office of Physical Plant, during a recent talk he gave about composting to faculty and staff in the College of Earth and Mineral Sciences' Earth and Environmental Systems Institute.

The composting program is now in about 70 buildings, including Earth-Engineering Science and Deike buildings. Matyaskovsky said about four to five buildings are being added each week, with an end goal of reaching all 742 buildings on campus in the next few years. It's part of the University-wide effort to dramatically reduce landfill waste, which includes other initiatives such as the annual Trash to Treasure sale. In that case, students who are moving out of on-campus housing donate their usable items that are then resold rather than being pitched in the garbage and sent to a landfill.

In the case of composting, faculty, staff and students toss their organic garbage in the composting bin. Those bins are outfitted with compostable bags made from corn starch and cotton seed and collected frequently to head off problems with odor and insects. The composting rule, Matyasovsky said, is: "if it rots, pitch it in."

From those bins, the compost is taken to the university's central composting site, where it's turned into black gold that's later used to fertilize the plants and trees around campus. Last year, Penn State produced 15,372 tons of garbage, but 9,853 tons or 65 percent of it was diverted from the landfills. That year, the university produced 1,300 tons of compost — a number that will grow as the program expands.

"We're not going to be satisfied until nothing goes into a landfill," Matyasovsky said. For more information on the program, go to Penn State Sustainability